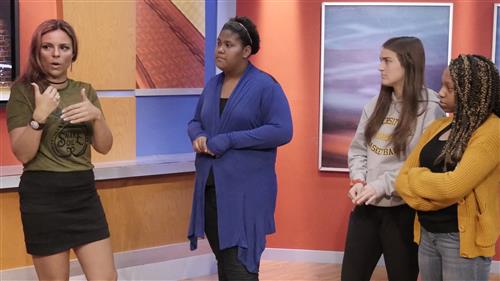 Even with the 2018-19 school year winding down, our efforts are ramping up to send our SDUC newscasters to the Big Apple next year to tour the production studios of various national newscasts!

To get a taste of what they will see in New York,  the student broadcasters visited local station STL Television on May 13 to learn all about video production and experience how a program comes together from behind-the-scenes.

The students watched the locally-produced entertainment program, The Daily Mix. Half of the group observed from the control room while the other half watched from in-studio. Following the taping, they queried the show’s director Joe Brown about various technical aspects involving shooting quality video and processing audio. Show host Angella Sharpe also answered their questions on story selection, interviewing and producing.

In November 2018, the School District of University City launched the student-led newscast known as SDUC News. This groundbreaking production has distinguished the District as one of the few school systems in the region with a student-led newscast. Currently, there are six UCHS students involved in the production, with plans to include middle school students in the fall.

The newscast is intended to inform district students, teachers, staff, parents, and the broader University City community about the great things happening in the School District of University City. Each newscast episode is approximately 5-10 minutes long and features stories published on our website, as well as those published in the UCity PRIDE newsletter.

In mid-March, KTVI Fox 2 feature reporter Tim Ezell visited the school and featured our news team on the station’s morning newscast. Ezell also helped us make a special announcement on Facebook about our plans to take them to New York City in 2020 to visit various television networks. So far, we’ve raised more than $3,000 to help cover travel costs.

To learn more about our NYC trip, please visit: www.ucityschools.org/uc2nyc2020.

SDUC News is produced monthly and posted on the District’s YouTube channel and website. To view the most recent newscast, visit: www.ucityschools.org/sducnews.