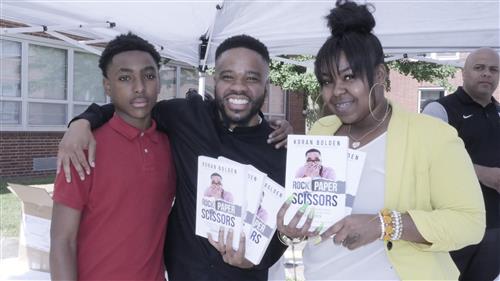 The summer between 8th grade and high school is a time of anticipation, growth, and decisions.

Making good decisions can be a challenge at a time in life when the brain isn’t fully matured and the freedom of summer beckons.

St. Louis native and nationally known motivational speaker Koran Bolden has an energizing way of connecting with teens. On Thursday, May 24, 2019, Bolden shared his wisdom about good decision-making and finding success during the 8th-grade promotion ceremony at Brittany Woods Middle School.

Later, Bolden mingled with the students and their parents at a barbecue picnic in the school’s courtyard.

His visit on the last day of school marked the culmination of Project Restore, a year-long grant-funded parent and student engagement program.  During the past school year, the District hosted four parent workshop at the middle school to guide them through effective, positive parenting strategies in the adolescent years. 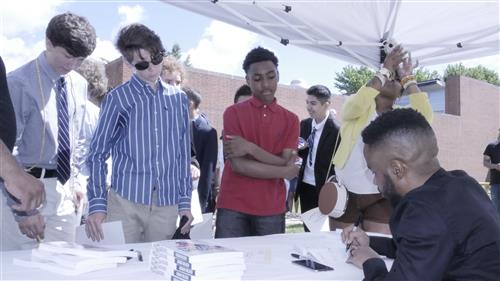 Bolden’s celebratory visit and the picnic aimed to keep families engaged with the School District in a positive and supportive way – because engaged and involved parents have a positive influence on both student attendance and academic performance.

Bolden is the Chief Motivational Officer of his company, Dream Success World Wide. He was also University City High School’s keynote speaker during its 2017-18 graduation ceremony.

An avowed fan of University City schools, Bolden told the rising ninth-graders about his theory of “Rock, Paper, Scissors” when it comes to making sound decisions and achieving big dreams.

The Rock represents the powerful foundation of believing in oneself, he explained.

“Believing means that you understand you’re part of that dream and play that part in making it happen before it happens,” he said.

The Paper represents the place where you write down your dreams and map out solid plans, which includes excelling in high school.

And, The Scissors, he said, represent the tools a person needs to cut out the bad influences that stand in the way of the dream.

“Whenever you have a belief in something, and you write it down on paper, and you begin to act on it, there is an opposing force that is going to try and lead you astray. And, at that moment in time, I want you to look, and to reach down into your pocket, and pull out your scissors, and cut everything out of your life that does not line up with your dream.”

All of the rising ninth-graders were given a free copy of Bolden’s book, also titled, “Rock, Paper, Scissors.”

Gary Spiller, executive director of student services and innovation, said the event gave the students an inspirational start to their summer.

“We expect great things from them, and wish them the happiest and healthiest of summers, so they come to high school ready to achieve their dreams,” he said. 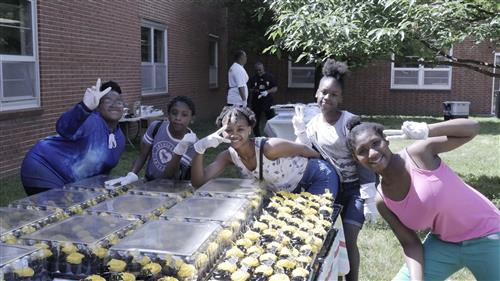