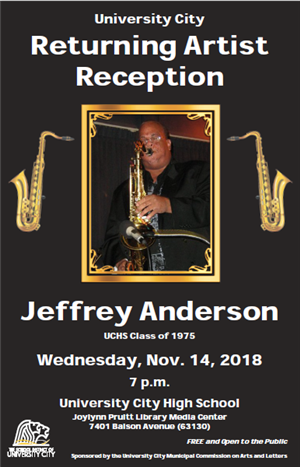 In addition to the reception, Anderson will visit University City schools during the week of Nov. 12-16. Interested media may contact the Communications Office of The School District of University City to coordinate scheduling.

More information about the Returning Artist series is available at ucityartsandletters.org.

Bassist Jeffrey Charles Anderson was born in Lawrence, Kansas and moved to St. Louis, Missouri, when he was eight years old. He is a 1975 graduate of University City High School where he was admitted to Who’s Who Among American High School Music Students. Anderson plays saxophone, bass, and piano. In 1976, he was honored with the University of Wisconsin Jazz Festival Award for Outstanding Saxophone Soloist in a Combo and in the Big Band category. A 1982 graduate of Morris Brown College, with a Bachelor of Arts in Music Performance, he has gone on to teach various summer camps at Kirkwood High School and Southern Illinois University at Edwardsville. Anderson also taught in The School District of University City’s Sunrise Conservatory Program and at the University of Missouri - St. Louis. He was a graduate assistant at the University of Southern Illinois at Edwardsville, where he received his master’s degree in Jazz Performance.

In 1996, Anderson was musician, music director and composer for (“For Colored Girls who have Considered Suicide When the Rainbow is Enuf”) The People’s Light & Theater Company in St. Louis. He performed with many artists such as Peabo Bryson, The Dells, Jamey Abersold, Marlena Shaw, Spanky Wilson, Lou Donaldson, Dakota Station, Jean Carne, Vanessa Rubin, Hugh “Peanuts” Whalum, Kirk Whalum, Phil Woods, Johnny O’Neal, John Hicks, Mary Stallings, and many talented local musicians in various cities in the United States and abroad. Currently,  Anderson is a member of the adjunct faculty at Washington University in St.Louis.

He is married to his wife Edie of 15 years. In addition, he is part owner of Nu Millennium Studios and High Resolution Records in St. Louis.