Alexa has become a common household companion since Amazon began selling Echos and other voice-operated electronic devices. Alexa can do everything from switching on porch lights to coaching users on how to bake the perfect soufflé.

This past summer, however, Alexa got woke. That’s when the digital device began giving thousands of listeners highly informed lessons on the history of the Black Lives Matter movement in America from material in part curated by four University City High School students.

The students and their partner peers at Georgia State University’s school of social work have the potential to reach more than a million people through the Alexa skill they developed, showing just how far University City student voices can carry in the world.

How did this begin? In the classroom, of course. In the 2019-20 school year, students Adrianna Albert, Merrick Hoel, Jaiden Smith and Zoe Yudovich enrolled in Christina Sneed’s AP English and Composition class. They spent the year steeped in learning differing narratives of United States history and analyzed the New York Times’ landmark 1619 Project, reported by Pulitzer Prize-winning reporter Nikole Hannah-Jones. The students became highly aware of the African

American experience and the legacy of slavery, segregation and racism in the history of America. That led them to examine power systems and the emergence of the Black Lives Matter movement.

Their experience could have stopped at the end of the school year, but in early June, Principal Michael Peoples was approached and asked if had any students who might be interested in developing an Alexa skill through a new type of software developed by Bob Stolzberg, of Washington, Missouri. The software gave people who did not know how to code the technology to develop “skills” or subjects to be added to Alexa’s database of information.

Stolzberg was shocked by the death of Eric Garner in 2018 by police restraint after Garner pleaded with police and said, “I can’t breathe.” He decided to find students who could build a skill on Black Lives Matter and contacted Peoples through a mutual acquaintance. When Peoples approached Sneed about the summer project, she knew immediately that her four students were the perfect fit.

Albert, Hoel, Smith and Yudovich spent three months gathering information and talking from their perspectives about how they were (or were not) impacted by inequity, white privilege and the reality of police violence against Black people. The group was tasked with coming up with questions users might ask Alexa as well as biographies of people central to the Black Lives Matter movement and protests around the nation. Their work included responses to questions like, “Alexa, what is Black Lives Matter?” and “Alexa, what was Black Wall Street?” to biographies of Sandra Bland, Tamir Rice, Ahmaud Arbery and other African Americans who were killed by police. Yudovich further built a skill that can send a text to users with a link to a list of Black-owned businesses and companies nationwide.

“Imagine if we had those conversations nationwide and worldwide - the actual history of African Americans and others and not what we’ve been normally taught,” she said. “Just think how different things could be and people could be.”

The project involved collaboration. The UCHS students shared their work with college students from Georgia State University who offered feedback, writing advice, and final editing. In late August, the skill launched. Within less than a week, 1,000 people had installed it on their Alexa device. Their goal is to reach more than a million active users.

In September, Hoel, Smith and Yudovich, who are now seniors, met with Stolzberg to try out the newly launched Alexa skill. (Albert had already moved to Columbia to start her freshman year at Mizzou). Their eyes brightened when they heard Alexa’s familiar voice repeat the scripts they had written.

“When we were in Zoom meetings with the college students, the project just felt so small. I was just sharing my work with these 15 people,” Smith said. “And then, to hear it being said out loud by Alexa to people around the world - it was really surreal.”

In September, Hoel, Smith, and Yudovich, who are now seniors, met with Stolzberg to try out the newly launched Alexa skill.  (Albert had already moved to Columbia to start her freshman at Mizzou). Their eyes brightened when they heard Alexa’s familiar voice repeat the scripts they had written. 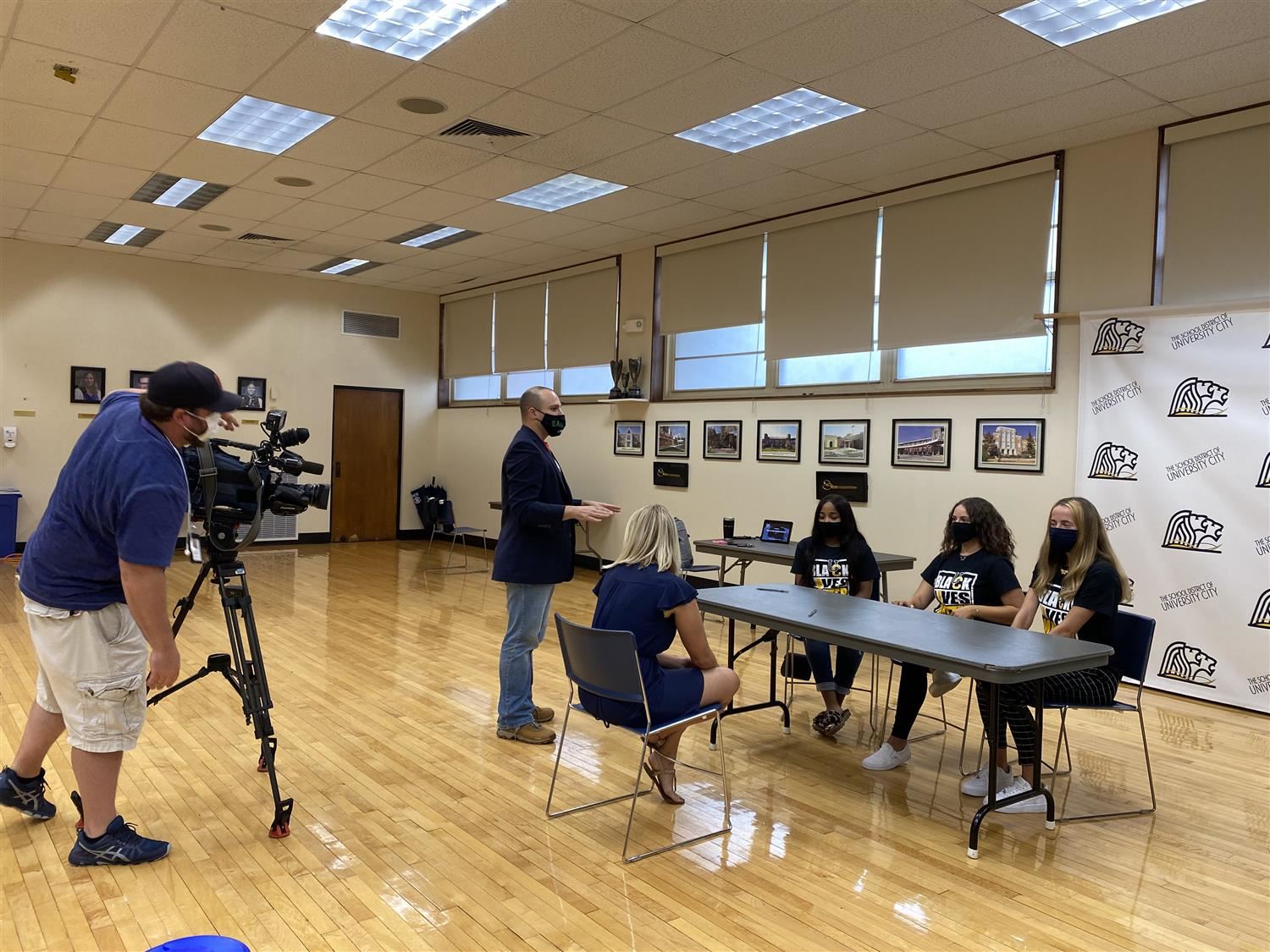 The students said they have learned a lot about speaking up and recognizing inequity and racial injustice. They’ve grown comfortable talking about uncomfortable topics like white privilege with acquaintances who may or may not recognize their privilege or systems of racial oppression. Talking about it is not as hard as people think, Hoel said.

“Imagine if we had those conversations nationwide and worldwide - the actual history of African Americans and others and not what we’ve been normally taught,” she said. “Just think how different things could be and people could be.”

The students’ project was highlighted in a report by KMOV News Channel 4. To install the feature on your Alexa device, say “Alexa, install the Black Lives Matter skill.”