During Restorative Practices Day on Feb. 7, 2020, University City High School student and teacher engage in restorative circles to be conducted in every high school class that day.

By Melanie Steen
Director of Communications

Since early fall, students in Matt Tuths and Bishop Luther Bakers’ unique University City High School class have been learning how to build strong relationships and improve meaningful communication through the social science of restorative practices.

Now in their second semester of their Restorative Practices Class, students have read books, studied the social science, and worked with one another to be more confident in using specific listening, speaking and behavioral skills when conflicts arise in the high school or their own lives. The ultimate goal is to build trust, understanding, and an engaged school community that respects and supports one another. But it is one thing to learn something in a classroom, and quite another to bring it to their peers and teachers in a meaningful way. Could they do it? Would they be taken seriously?

On Friday, Feb. 7, the students got their chance to find out as part of Restorative Practices Day at University City High School. Wearing bright yellow T-shirts that read “Restorative Leader,” the students gathered during first-period for a pep talk for the day. Their goal was to help every student and teacher engage in restorative circles to be conducted in every high school class that day.

Consider it a circle marathon. From the start of the school buzzer at 7:20 a.m. to the end of the school day, students and teachers were asked to gather in circles and reflect on themselves as a community that cares for and watches out for one another.  It was all part of an effort to build understanding of restorative practices and to increase the use of circles in all aspects of the school day.

Circles are simple in theory, but take skill to run successfully. Participants sit or stand in a circle. A timely topic is introduced, and a ball is tossed between the participants. The person who gets the ball has the floor to speak while others listen. There is always the option to “pass” – no pressure and no questions asked. But successful circles ultimately make participants feel safe enough to speak and focused enough to listen to another person’s perspective, even if they don’t always agree.

There are common threads among students and staff who participate in restorative circles on a regular basis. They think before acting. They are able to sit or stand still and be present in the moment. And they are practiced in remaining respectful and calm during a time of potential conflict.

“The circles that we had today – they were very much relationship-building circles, some circles on self-reflection,” said Tuths after dismissal. “But in order for people to do them in a meaningful way and to feel comfortable opening up and being vulnerable, they need to feel a strong sense of trust with the other people in the circle.”

Restorative practices were introduced to the District during the 2018-19 school year under the leadership of Gary Spiller, executive director of student services and innovation. That year, Spiller and an initial group of teachers and staff began introducing the practices in an informal way in all grades– particularly the use of circles to check in and be present. Restorative practices were also made standard in disciplinary hearings so that those involved, including the instigator of a wrong and the recipient of that wrong, have a voice so the restoration of broken relationships can begin.

Now, in its second year, restorative circles and practices are becoming more the norm in schools, and students are feeling the difference.

“At first, when there was a conflict, I would pick a side,” said freshman Kahari Evans. “But with the circles, when there’s a conflict, I listen to both sides and stay in the middle instead of picking a side.”

“It really helps me a lot because it pushed me to look at the positive things and not the negative things. It pushes me to look at other people and how they struggle in their lives and find a way to connect with that person.”

Junior Marissa Green said restorative practices have helped in all aspects of her daily routine, including, school, sports and home life.

“It really helps me a lot because it pushed me to look at the positive things and not the negative things. It pushes me to look at other people and how they struggle in their lives and find a way to connect with that person,” she said. 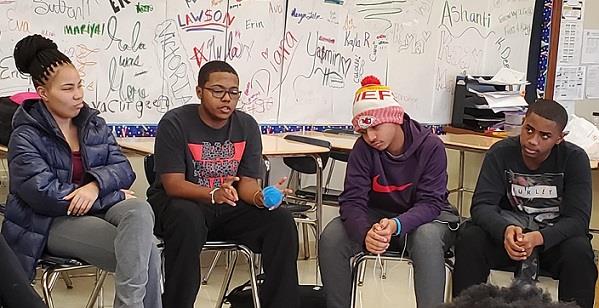 Though there are a growing number of students participating in restorative circles throughout the District, the goal is to get everyone committed to doing them every day, be it a class, a sports team or a club. Students in Tuths’ Latin class are already taking part in them almost daily. Tuths said, for a circle to become effective, it’s best to have a consistent group to build upon existing relationships. A process like that can take several weeks. That’s why classroom and other routine student settings are ideal for circles.

“It’s been incredible for me to see when students are provided with the safe space and the time to feel comfortable opening up, just how much weight they’re carrying with them day-to-day, and how resilient they’ve truly been,” Tuths said.

Senior Roberta Booth said she thrives in her role as a Restorative Leader at the high school. Leaders like Booth are trained to know what to do when a circle is or is not working. They know how to ask the right follow-up questions and to keep things moving along. She thinks the circles could greatly benefit the student population as a whole.

“We had an incident here (at UCHS) where a student was being bullied, but nobody knew that because they never spoke up,” said Booth. “That student eventually lashed out and they fought, but nobody knew the other person had been bullying them.”

The Restorative Practice Day was a culmination of special events and promotions. “We are U City” posters were hung in every classroom with the saying “I am because we are,” which comes from the African philosophy of Ubuntu – a concept in which a sense of self is shaped by relationships with other people. All students and staff were given T-shirts with the same wording. Stress balls were provided to all teachers and staff to conduct the circles. Staff also wore wristbands asking “How “with” am I?” – a nod to the fact students do best when you do things with them, not for them.

Spiller said the day was a success. The Restorative Leaders were respected by their peers and put restorative practices in the spotlight. Students who had never done so were able to participate in restorative circles with their peers. And for teachers, it allowed them to look inward and ask themselves if they were doing everything they could to engage with their students. Spiller is hoping that teachers will continue to consider how "with" they are with students and the high school community.

“It’s about shifting your questions, shifting the dialogue,” Spiller said. “It’s about being humble as an adult, a leader and a teacher and just doing things the right way.”