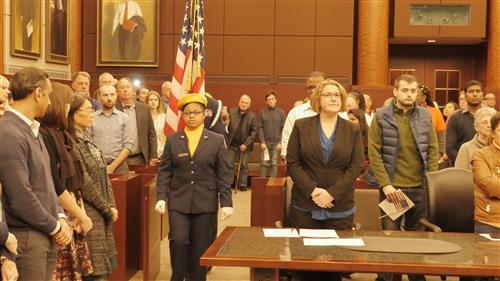 Students in Yul Amerson’s high school social studies and others from University City High School were invited to serve Friday in a Naturalization Ceremony to swear in new citizens to the United States.

Amerson’s students have been going to the downtown Thomas F. Eagleton Courthouse to visit The Honorable Shirley Padmore Mensah’s federal courtroom for several years to witness the ceremonies.

But this year, the U.S. Magistrate Judge for the Eastern District of Missouri invited University City High students to be a part of the ceremony, giving them a true feel of the pomp and circumstance behind such an important life event.

The UCHS Air Force JROTC Color Guard presented the flag at the start of the 11 a.m. ceremony to swear-in 54 new U.S. citizens from countries as diverse and far-flung as Nigeria, Thailand, Brazil, China and Ireland.

JROTC Cadet Ali Mitchell then sang  “This Land is Your Land” before Judge Padmore Mensah introduced speaker Louis E. Reed, President of the St. Louis Board of Aldermen.

After the 54 citizens took an oath of citizenship, JROTC Cadet Cameron Smith led the courtroom in the Pledge of Allegiance. Mitchell then sang the national anthem before the ceremony concluded with the presentation of Certificates of Citizenship.

Congratulations to the students and to the 54 new citizens to the United States! 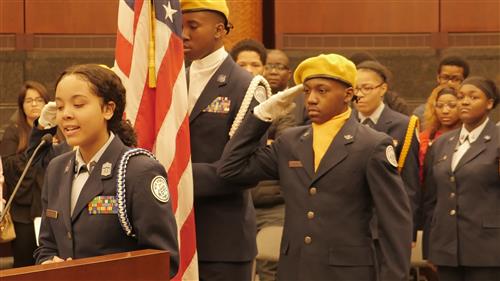 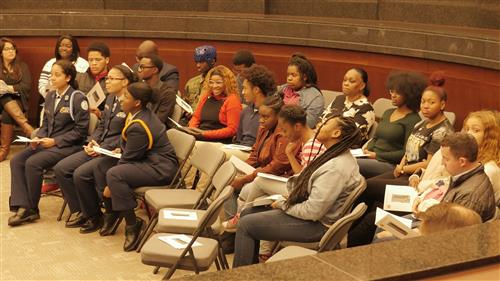